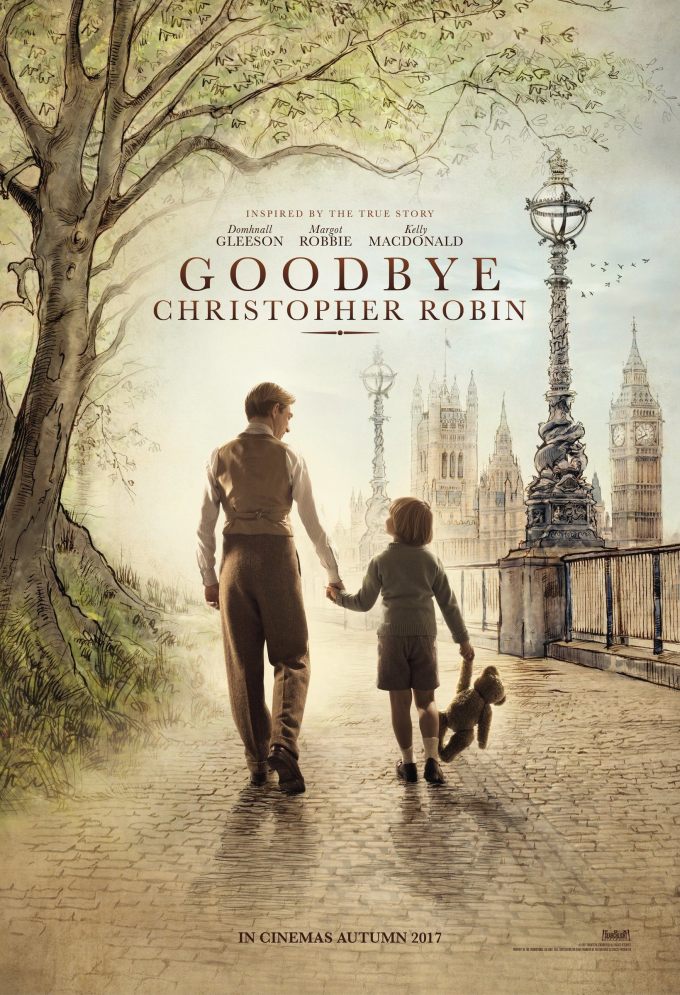 Biopics of any description can only ever be fragmentary, sketchy examinations of their subjects. Painting in broad strokes, as they inevitably do, it’s easy to cast aspersions or draw inferences about the lives of these historical figures whilst avoiding nuance and richness of detail. Does this render them incapable of insight and intelligence? Not necessarily, and in the case of Goodbye Christopher Robin (2017), a portrait of Winnie the Pooh author A.A. Milne and his son Christopher, there are certainly a handful of genuinely poignant moments in the screenplay by long-time Michael Winterbottom collaborator Frank Cottrell Boyce and Simon Vaughan. The most notable of these honestly broach the darkest threads of Milne’s troubled life, including the initial struggles of anonymity, the curse of success and the terrible cost of both on an individual’s relationships.

Director Simon Curtis is no stranger to this realm of storytelling. His debut feature, after a length apprenticeship in TV, was My Week With Marilyn (2011) which focused on a very specific moment in the life and times of Marilyn Monroe. Turning to a key figure in children’s literature of the 20th Century, Curtis has cast his film well, specifically in the case of Domhnall Gleeson as Milne, a man psychologically wounded by war and emotionally distant thereafter. His wife Daphne (Margot Robbie) is gradually revealed as a frivolous, wretched creature whose attachment to Milne was only ever based on an assumption that he would continue to write and achieve the fame and notoriety that he eventually claimed, thus giving her social opportunities and the promise of a more lavish lifestyle. The arrival of their son Christopher Robin Milne (Wil Tilson and, in late scenes as an 18 year old, Alex Lawther), nicknamed Billy, was more an inconvenient aside than the culmination of a lifelong yearning.

Milne is an awkward parent who can’t relate the innocent child’s perspective of his son but everything changes when he’s thrust into duty during his lowest creative ebb. Having moved away from London to a ramshackle country retreat, he has been abandoned by Daphne, and with Christopher’s nanny Olive (the always superb Kelly Macdonald) called away to be with her ailing father, Milne must actively confront the full scope of his parental duties for the first time. A kind of bonding occurs and utilising his son’s stuffed toys he conjures up a series of adventures for them all in the surrounding woods. The toys become integrated into Milne’s suddenly re-charged creative process and act as the key figures in his stories of Winnie the Pooh, including Tigger, Donkey, Eeyore, Piglet and, of course, their wise human friend, ‘Christopher Robin’.

The score by Carter Burwell is yet another classy contribution from a composer more often associated with the Coen brothers but who never disappoints, delivering music attentively attuned to each project’s needs, whether darkly comic, sensitive or quirky. For Goodbye Christopher Robin he provides a near perfect score. At times it’s openly melodic in a restrained, pastoral English vein; in others, gently probing at the darker edges of Milne’s mental fragility, recollections of war duelling with the harshness and inadequateness of the world he’s returned to. Yet deploying a small orchestral ensemble Burwell always keeps his music in check, never tipping over into overt sentimentality. It’s this masterful control that distinguishes so much of his best work, including his masterpiece Carol (2015), written for Todd Haynes’s extraordinary feast for the senses.

There’s ultimately nothing ground-breaking about Curtis’s film. It follows a formula or template we’ve all subliminally memorised and could recognise in a heartbeat. Accept the ‘facts’ of real lives with a grain of salt, knowing that creative embellishments – outlandish ones even – are part and parcel of how these nostalgic reconstructive dramas are made more palatable, both in their conception and, ultimately, in their re-telling. Goodbye Christopher Robin proves to be a proficient, highly entertaining example, all reservations aside. The performances are strong, eliciting emotional reactions that have truthfulness attached to them in the film’s very best scenes. It may even inspire some to re-examine Milne’s life through his timeless work, not a bad thing at all, if it means finding the child inside of us all once again. 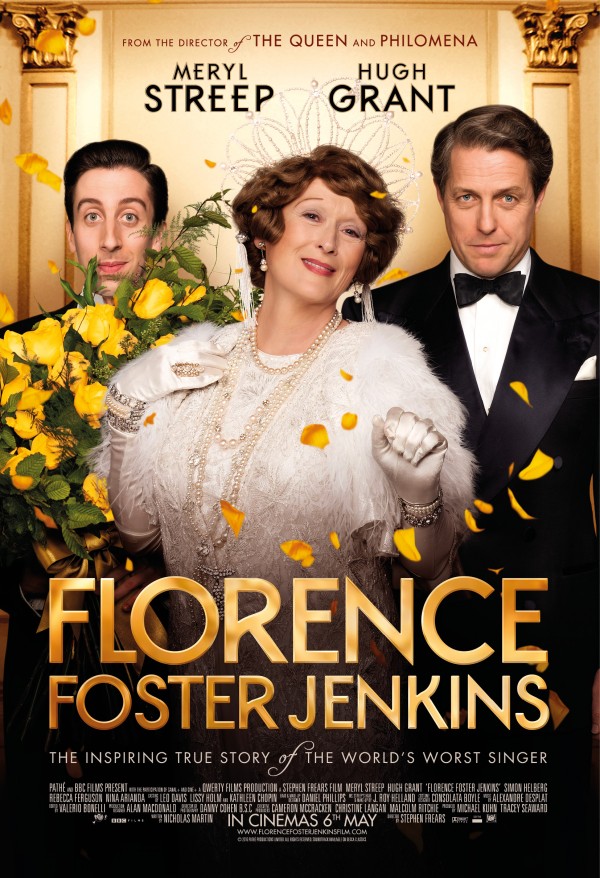 A beloved society woman, Florence Foster Jenkins (Meryl Streep) and patron of the arts is convinced of her ability to sing opera like the greats, an opinion that’s given credence by the abiding support of her husband St. Clair Bayfield (Hugh Grant), an actor who long ago abandoned his staunchest dreams of becoming an actor to be Florence’s tireless advocate and soul mate. Bayfield has never consummated his relationship with his wife – because of a long-endured medical condition of hers – and lives elsewhere in a small flat with his frustrated girlfriend Kathleen (Rebecca Ferguson), an arrangement that naturally causes occasional complications.

All these characters, and many more, partake in an absurd but magnificently perpetuated sense of grand delusion. The admirable sustainability of such a delusion is, essentially, what the film boils down to, though other themes are scattered throughout – the championing of the spirit of participation, of fearlessly attempting to tackle your dreams and believe in your abilities, opinions to the contrary be damned. If this delusional grandiosity can be preserved for as long as it is thanks to a combination of wealth and industriousness on behalf of Bayfield, mostly, then so be it.

Director Stephen Frears’ latest is a meticulously crafted, thoroughly entertaining drama. It’s also side-splittingly funny at times, thanks to Nicolas Martin’s classy screenplay and Streep’s immense vocal talents. With deftness, and an exquisite awareness of the innate comedic potential at hand, she’s able to exaggerate Florence’s dodgy range in both her warm-ups with esteemed vocal coach Carlo Edwards (David Haig) – another who willingly perpetuates this notion of Florence actually possessing talent by keeping his weighty paycheques foremost in his mind – and on stage.

It’s during these moments, before a crowd, that the laughter at Florence’s ineptness gets drowned out by mocking, rapturous applause that transforms into admiration for the sheer bravura of her persistence and obliviousness. The press run with the positive angle, selling the myth of Florence’s talent; the esteem in which she’s held by the music community and its benefactors allows a buffer zone to form around her, protecting her from the truth. But for how long exactly?

Frears has long proven himself to be one of British cinema’s most prolific and versatile directors. Though he’s made the occasional misstep, his ever-expanding back-catalogue is marked by its remarkable consistency, including more recently, The Queen (2006), Philomena (2013).There have been occasional flirtations with greatness too, as in his early masterwork The Hit (1984) and beloved Nick Hornby adaptation, High Fidelity (2000). In general, he’s had a knack for acquiring projects that aspire to a very credible melding of commercial success and semi-arthouse prestige.

Is there really any point dragging out yet another string of plaudits for Streep? The woman is, simply put, a marvel, her immersion into characters of all types, from every walk of life, constantly surprising. She makes this lovable but occasionally absurd woman impossible to dislike and very easy to fall into – for the vastness of her delusion, for her soulfulness, for the hints of tragedy that have coloured her success and for her almost divine fortitude in outlasting the medical fraternity’s dire assessment of her infirmities.

Grant gives one of his finest performances as the extraordinarily devout Bayfield whose politeness, solemnity and diligence in being able to foresee and smooth over any cracks in Florence’s public façade allows for piercing moments of tenderness and poignancy to temper the drama’s lightness. Special mention must also be made of the contribution of Simon Helberg as Florence’s pianist of choice, Cosme McMoon, whose wild, hilarious assortment of facial distortions reflecting his rapture at getting the job and then astonishment and horror at first hearing Florence sing are worth the price of admission alone. For his part Frears’ handling of the narrative is exceptionally proficient, a totally professional job that will ensure that Florence Foster Jenkins (2016) ranks amongst his finest of recent years.