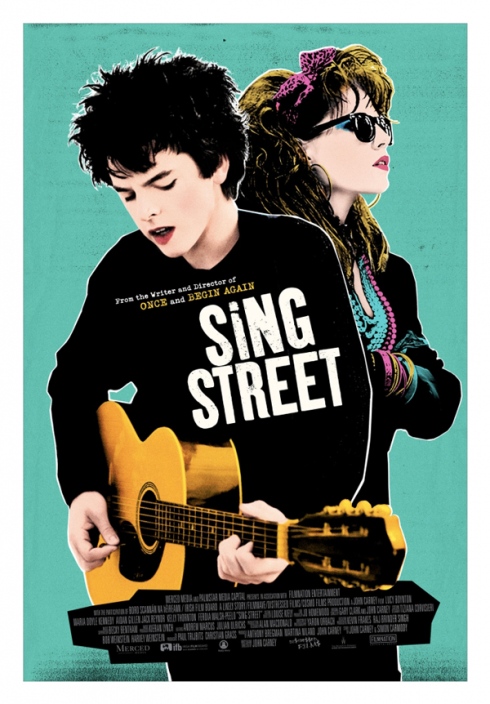 At the dawn of the pop video era, Dublin teenager Conor Lalor (Ferdia Walsh-Peelo) is riddled with typical teenage angst. A bully, Barry (Ian Kenny), has honed in on him at his new school, whilst at home the marriage of his parents (Aiden Gillen and Maria Doyle Kennedy) is sitting on a knife’s edge amidst constant bickering. His older brother Brendan (Jack Reynor) possesses a peerless knowledge of popular music but rarely leaves the house, wallowing in self-pity and the agony of musical dreams that he refused to chase down.

Then Conor spots a mysterious girl, Raphina (Lucy Boynton), in a building across the road from school. Looking far older than her years, with the poise and demeanour of a model waiting for discovery, he’s instantly smitten and attempting to impress his new mate Darren (Ben Carolan) he crosses the social divide and begins an awkward conversation. He invites her to be the star of his band’s next video clip. Only trouble is Conor doesn’t have a band. And so a rapid-fire recruitment kicks off, with rabbit-obsessed multi-instrumentalist Eamon (Mark McKenna) to first to be consulted; soon a makeshift bunch has been rounded up with Darren assigned cameraman duties.

Sing Street (2016), John Carney’s third straight musical feature is almost as good as his earlier two, the Oscar-winning Once (2007) and his American-set follow-up, the wholly underrated Begin Again (2013) which featured inspired, uninhibited performances from Mark Ruffalo and Keira Knightley. Sing Street fits comfortably into Carney’s CV but it’s a welcome, feel-good variation on a theme. The fondness for the era shines through, especially in constant references to the music of the mid-80’s like the explosion of British glam rock and the influential medium of the freshly utilised video clip.

Walsh-Peelo, in his first feature role, is incredibly assured and his naturalness on screen is a reflection of the young performer’s background in stage and television performances. His bandmates have all been cannily cast; each is given brilliant one-liners or physical gags that enhance their endearing, outsider status – the kind of status that many might reluctantly admit to feeling a recognisable affinity with. The glamourous Boynton has a genuine on-screen magnetism too. Raphina is a fascinating character, part ingénue, part tragic, revealing beauty mixed with a credibly deglamourized vulnerability as her emotional core is exposed by life’s bitter failings.

Carney’s themes are unoriginal ones but, attached to the lives of appealingly real characters, they’re not without resonance: ardently chase down your dreams, believe in a right time to take your chance in life or be condemned to carry the burden of regret forever. Stacked with hilarious asides, visual gags – the final footage of the band’s first, alley-shot clip is a side-splitting classic – and even some raw, 80’s inspired pop songs that believably bring this band’s spirit to life, Sing Street is wonderful entertainment of the purest sort, an uplifting tribute to heedless young love, rebelliousness, revelling in new experiences, and the music that matters to its generation.