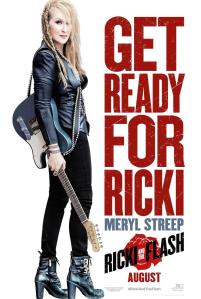 Like her previous screenplay for Jason Reitman’s Young Adult (2011), Diablo Cody’s Ricki and the Flash (2015) showcases a brilliant lead role for a damaged woman struggling to come to terms with the failings of her past. Charlize Theron was simply staggering as Mavis Gary in Young Adult as a writer of a waning teen fiction series returning to her home town to rekindle an old flame. Fraught with dangerous interactions with ghosts from her past, much of Mavis’s optimism is delusional in nature, leading to a troubling, melancholic flameout as her grimly-preserved memories are derailed by a brutal reality.

In this new film directed by the great Jonathan Demme, Ricki Rendazzo (Meryl Streep) is an aging rock singer, struggling to make ends meet as, between shifts as a check-out chick, she belts out cover tunes with her band The Flash before a paltry few locals at a Tarzana, California bar, including guitarist and love interest Greg (Rick Springfield). When ex-husband Pete (Kevin Kline) calls with a plea for assistance to deal with their daughter Julie (Streep’s real-life daughter Mamie Gummer) whose marriage break-up has left her suicidal, Ricki jumps on a plane to Indiana with little idea as to what constructive use she be. Of course it doesn’t all go swimmingly; Ricki’s mere presence leads to her children prodding at old wounds opened by abandonment issues. An awkward dinner scene brilliantly flushes these into the open as the family – surrounded by increasingly curious and outraged onlookers – struggles to maintain civility amidst the elevating hostilities.

Cody’s screenplay is wonderful, able to maintain a remarkable consistency in her characterisations. I especially admire how she allows moments of wry black humour to truthfully highlight and reflect human shortcomings whilst never really abandoning naturalism. Ricki’s failings are glaring; she’s clearly been a less than model parent to these children. But Cody never allows anyone’s shortcomings or bad choices to become points of derision; instead she points her characters optimistically towards some form of reconciliation. Demme, who makes too few fictional films these days, is no stranger to music-related material, having worked over the course of many years with Neil Young especially as well as Bruce Springsteen and Talking Heads, and he adeptly handles the band’s energetic and passionate live performances.

The music itself is wonderful, with Streep belting out some standard rock classics with conviction if not quite musical perfection. It’s the film’s warts-and-all truthfulness of the characters, combined with a startling, unexpected tenderness that really brings these sequences and others alive. This lovable rag-tag crew of veterans may never play packed auditoriums but there’s a raw, heart-and-soul vibe that almost elicits a tear in the way a wholly believable sense of camaraderie between them on stage is evoked. It’s easy to take Streep’s mercurial abilities for granted. She’s so damn good so much of the time that we tend to approach her films with automatically raised expectations. But even this extraordinary actress, in once again expanding her repertoire, proves that she can still surprise you, inhabiting a new character in a moving, surprisingly fresh way. She’s a marvel here, and with Cody’s astute and funny screenplay having us invested in all of her characters’ fates, Ricki and the Flash is an affecting gem of a film.